Maria Sams – Shadow PlaySaturday 25th February – Saturday 1st April 2017The SE9 Container Gallery is proud to present a solo exhibition by our Artist in Residence Maria Sams. Shadow Play exhibits a series of  paper-cuts and animation inspired by the theme of light and shadow. Maria will be screening her latest animation work as well as revealing the process behind her techniques through a collection of photographs, original drawings, sketchbooks and a mechanical animated flip-book.During her BA in Illustration Maria specialised in making her drawings and paper-cuts move, telling playful narratives with intricate visual details. She has since been awarded Best Animation at the National Student Film Festival and became our Artist in Residence from September 2016.

The exhibition consists of a collection of large illustrated silk-screen prints based on collages made from found imagery of the middle east (both figurative and scenic). The conceptual basis of the exhibition is to demonstrate how found imagery has always been put through a number of “filters” or has a certain amount of vested interest attached to it.

A year ago, to coincide with the opening of the SE9 Container Gallery, we hosted the ‘Outlaws’ exhibition by the artist Robert Priseman. The exhibition consisted of 35 pencil-drawn portraits of women who had been executed in the USA. The portraits were hung and presented with a brief biography of the subject, giving the viewer an explanation of why the individual had been executed.

As part of the STM Year 11 students’ Identity project, Robert Priseman gave a talk and carried out a workshop giving a rare insight into the unique drawing techniques he uses.

Presented in the ‘Influences’ exhibition are the students’ take on Robert Priseman’s work. As part of their Identity project, the artists have chosen to do portraits of people who have influenced them throughout their lives. The exhibition has been presented in the same manor as Priseman’s ‘Outlaws’ in order to display the direct correlation between the two.

‘An Introduction to Mixed Media Mosaics’ Workshop by Aliyah Gator

The Se9 Container Gallery is hosting a workshop with current exhibitor Illustration and Mosaics Artist, Aliyah Gator. Aliyah will be providing an introduction to her work as well as demonstrations and materials in order to create your own mixed media mosaic. 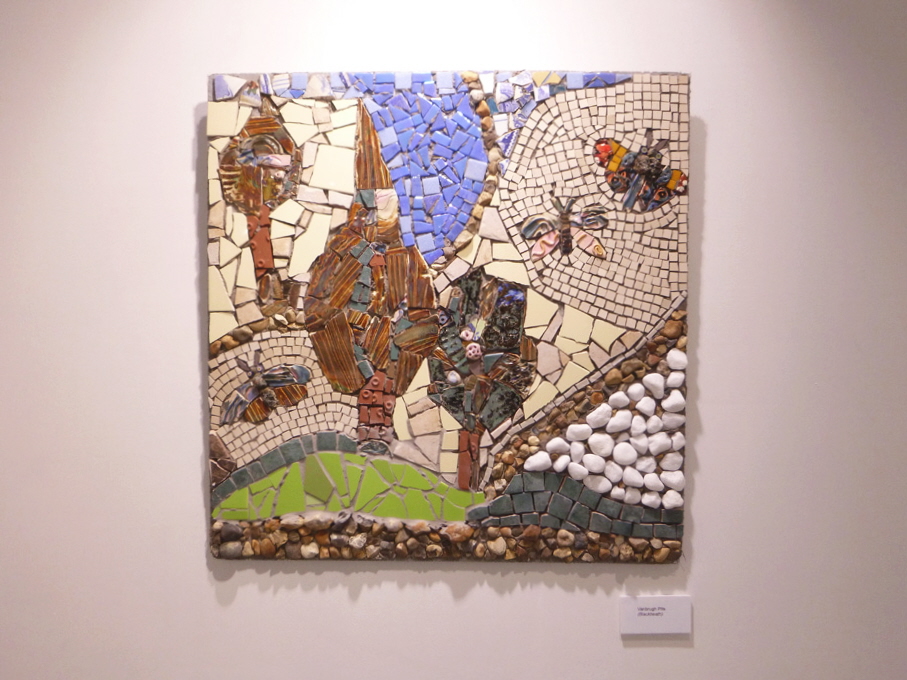 ‘The Organic World’ is an exhibition of mixed-media mosaics inspired by the nature reserves and parks of South East London.  Aliyah has lived in Greenwich for the past 6 years, and has family connections with the area stretching back several hundred years. She has a clear passion for natural beauty of Greenwich and has expressed her admiration for the parks, heaths and open spaces, as well as the animals and plant life that inhabit it. The art of mosaic making is one that is rarely exposed to its full potential within a gallery environment. Don’t miss this opportunity to view Aliyah’s skilful and heartfelt response to the organic world in South East London.

“I try to use material wherever possible from a sustainable source: this means recycled glass tiles, broken tiles which have been donated or given to me by tile companies, unwanted tiles from commercial projects, and pebbles and gravel supplied by green companies. Dotted throughout the pieces you will also see mudlarked tiles… these are random pieces of china which I have picked up off the shores of the River Thames. These range in colour from blue delft tiles, to multi-coloured modern ceramic ware, to the greys, greens and browns of 19th century salt glaze pottery from Lambeth. The shores of the River Thames are a never ending source of interesting ceramic finds.”

The Brentwood Stations of the Cross

This unique exhibition was first shown at Brentwood Cathedral from Ash Wednesday to Good Friday 2015. A group show featuring 15 talented British painters; artists who are critically respected and have exhibited pieces in both major public and private collections.

Each artist was given the title of a different Station together with an identical blank twelve inch square aluminium panel. The artists were completely free to respond to their allocated subject in whatever way they chose.

The artists who created the ‘Stations of the Cross’ artworks have approached this challenge with the same creative openness and intellectual rigour which they would have applied to any other subject; and this project has shown not only that art and faith can find creative ways to talk to one another, but that they have a real moral imperative to do so.

An exciting group exhibition featuring all 37 of the talented Year 11 Art students we have here at St Thomas More Catholic School the Year 11 Summer Show showcases and celebrates their many talents. The show features the highlights from the two year art GCSE course.

Throughout the course students have studied different artists, artistic movements and cultural themes. They have practised different techniques in a whole range of media. For the exhibition students have selected their favourite pieces and you will see a wide variety of work. For the students this will be their first exhibition and the first time St Thomas More are opening the art exhibition up for the public to see. 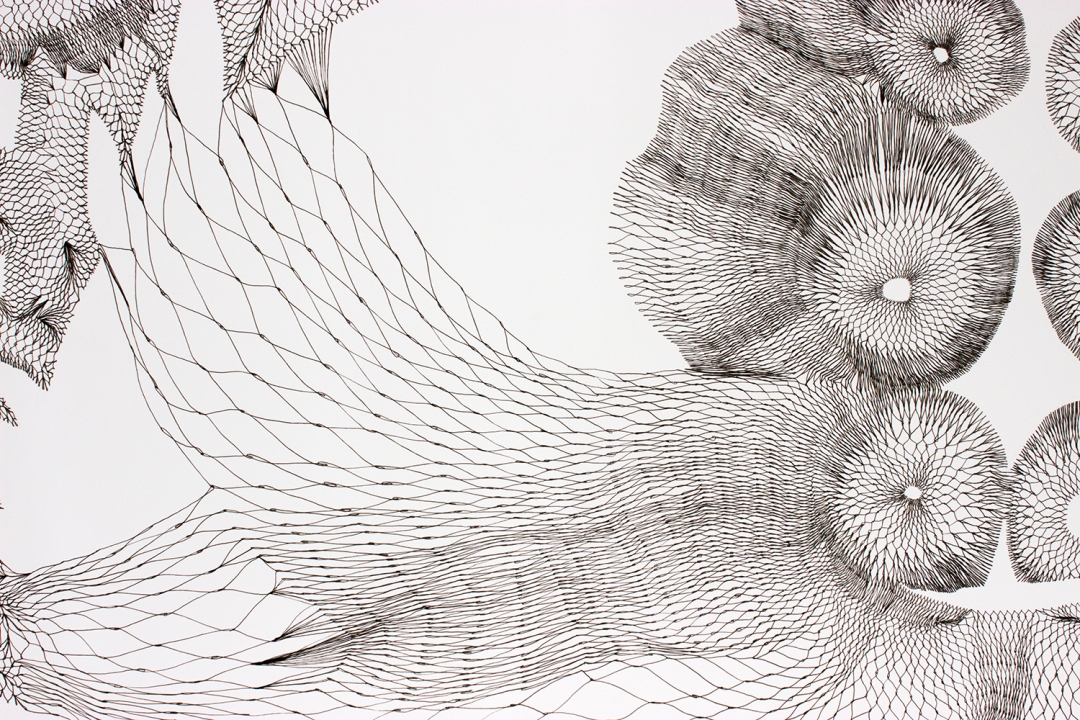 Natalie Ryde presents a collection of drawings inspired by the route most traveled, an intended direction at the SE9 Container Gallery. It alludes to working methods and ritual, our repeated circuits and circadian rhythms.

We are often shown the way or plot a course before we set out on a journey, looking for reference points to keep ourselves right: landmarks, maps and the tracks of others. Where a map could be seen as an approximation of a larger geography, these drawings each explore a different course of my thinking. Drawings stretch out to the edge of the paper suggesting that what is visible is only a fragment of the whole, while others float over an indeterminate surface, fully formed but open to interpretation.

These works take the form of undulating meshed surfaces, rendered in archival pen, paint and ink, which expand and contract as they develop. The repetition and intensity of working freehand has a meditative effect; these are thinking drawings that untangle and resolve. The patterns in the drawings echo the act of following a familiar course, they explore subtle fluctuations within a repetitive sequence of movements. The physical process of creating the drawings is not dissimilar to that of writing and as I build up lines of markings a complex surface emerges. Without anchorage in language, the compositions act as subliminal stimuli, inviting fresh associations.

‘Contemporary British Abstraction’ is a group show including thirty-five artists all working in the United Kingdom. Selected by artists Matthew Macaulay and Terry Greene, this exhibition has been brought together to highlight how active and vibrant abstraction is today with multiple lines of enquiry being opened and explored.

New contemporary artists move in and out of abstraction easily, unlike the mid-20th century artists who were forced to take sides between abstraction and representation. The new generation of artists seem increasingly motivated to create work that sustains and creates new dialogue over the non-representational.

The show brings together artists who have been creating abstract work in the United Kingdom over the last two years. This exhibition includes many important works that have been created by painters with different levels of experience ranging from those who are new to the medium to those who are well-seasoned lifers. The exhibition moves radically between innovative use of geometry, intuition, hard-edge and the painterly.

This exhibition is only a glimpse of the current abstract scene and the range of painters who are working in the United Kingdom at this point in time. By hanging these painters it will be interesting to see the structure that holds their difference together and whether it offers the viewer a coherent offering.’

The SE9 Container Gallery is pleased to announce our first exhibition of 2015 will be Outlaws, a brand new body of work from esteemed artist Robert Priseman.

Outlaws is a series of finely drawn portraits of women. It is not until you read their stories that you realise these women have been executed for murder. Between 1900 and 2005, fifty women were executed in the USA, some as young as 17.  Outlaws reveals to us the story of 36 of them.

A British born artist, Robert Priseman has paintings in many international art collections such as the V&A in London, Art Gallery of New South Wales in Sydney, Honolulu Museum of Art, Scottish National Gallery of Modern Art and the Museum der Moderne in Salzburg.  A recent interview with the artist was included in Michael Peppiatt’s book ‘Interviews with Artists 1966 – 2012′ alongside artists such as Francis Bacon, Henry Moore, Henry Cartier -Bresson, Sonia Delaunay, Frank Auerbach, Balthus and Giacometti.

Between 2012 and 2014 Robert formed the Priseman-Seabrook Collection of 21stCentury British Painting which opens for the first time at Huddersfield Art Gallery on the 1st November, 2014.

The book to accompany the exhibition is now available. Click on the link below to purchase it from Amazon.

As part of her residency, Hawkins has researched and archived the school’s 50 year history which is currently being celebrated though her exhibition 50.  Many images have been chosen from the school’s rich history and covers all eras.  The main focus of the exhibition are three cut-outs of group photos which have been reliving their glory days in a journey around the school.  This journey has been documented on film with the cut-outs going through the motions and the pace of a school day. The installations are constructed and displayed in a playful manner, oscillating between two-dimensional and three-dimensional modes.

Cut-outs are often present in Hawkins’ installations.  By highlighting particular objects and characters in this way, the focal point is shifted to a form that can visually make something stand alone from the rest. The prop like stance of the cut-outs helps push the performative nature of Hawkins’ practice. The artist’s presence in the film allows the audience to see the connection that every decision made is through the act of experimentation and the relationship to the materials chosen to play a part in the work.